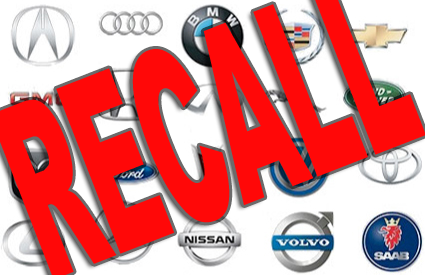 You hear about automotive recalls all the time in the newspaper, on the Internet, as well as on the nightly news. Amazingly, one in 5 cars traveling the roads today were recalled for one reason or another in 2014. That is on track to be the record year in total number of vehicles recalled. However, even more amazing is the fact that only about one third of the owners of the recalled vehicles chose to take their car in for the needed repairs.

The NHTSA, National Highway and Traffic Safety Administration, began requiring automakers to recall vehicles for safety defects in 1966 and has since recalled 540.8 million vehicles. The car manufacturers are required to mail letters to inform owners of affected vehicles of the recall, regardless of whether it is a major or minor event. Also, the information regarding the recall is delivered to consumers in so many different mediums it is almost impossible that owners of the affected vehicles do not learn of the problems. However, people seem to think that if they are not experiencing any problems at the moment then the recall affects all of the other vehicles instead of theirs and end up ignoring the recall. This is negligence and simply asking for the problem with the car to crop up. However, if this happens after the recall then it is the owners fault because they were given the information and allowed to fix the problem free of charge yet they simply ignored it. As long as car manufacturers report the recall and inform owners of the vehicles as they are required to do by law, it is up to the consumer to take advantage of the recall and have their automobile fixed. If not, then the owner is taking the risk.

If you have not heard anything about car recalls or just bought a used vehicle and want to find out if the manufacturer issued any recalls then you should check out www.nhtsa.gov or www.recalls.gov to see if your car is listed.

These websites have all the information about recalls over the past years so you can search through the year, make, and model of a vehicle to see if yours is listed. It is very likely you will see your car listed on one of these website because of the shear amount of automotive recalls So far in 2014, GM has 28 million alone. Check out the numbers:

Almost 64 million cars were recalled in 2014 in about 803 recalls. That is almost unbelievable considering the amount of technology used in developing cars as well as the fact that cars are safer than they have ever been. However, it is true that mistakes are still taking places and consumers are buying vehicles with basic problems like fuses or major problems with switches, tires, and seats buckling in crashes. Regardless of whether or not you believe you are driving a safe car you need to check out the websites stated above every few months just to make sure your vehicle has not ended up on the list. If it has, don’t fall into the two thirds of individuals who never respond to the recall. Instead, head to the nearest dealership or authorized mechanic who can make the free repairs to your vehicle.

Why so many people don’t have time for free repairs is beyond me, but knowing your vehicle has a problem that could be potentially fatal for you and your family and that a free repair is available should be enough to motivate you to have the repair taken care of.

Another thing to keep in mind is that simple problems with your vehicle that result in a visit to the mechanic may not be a problem you are required to pay for. Millions of Americans each year take their cars to the mechanic for a basic repair, or even a major one, assuming something went wrong and they simply need to fix it. Unfortunately, many of these individuals never check to see if the problem was due to a recall and end up paying for a repair that might be free or discounted by the automobile manufacturer. So, armed with this knowledge the next time your vehicle has even the slightest problem make sure you check and see if the car has been recalled for similar problems and if you can get free repairs or discounted ones at the least. It is certainly worth checking out and could save you hundreds or even thousands of dollars.

In general, the reason so many people don’t respond to recalls is because they simply don’t understand the recall process. The NHTSA, is responsible for investigating consumer complaints regarding specific vehicles and problems associated with them. After several consumers have reported the same or similar problem to the NHTSA for the same model vehicle an investigation is launched. The point of the NHTSA investigation is to determine whether the consumer caused the problem or malfunction in some way or if the manufacturer of the vehicle is at fault. If the manufacturer is determined to be at fault then the owners of affected models will receive information in the mail regarding the recall of the vehicle with information included on how they can have the problem corrected free of charge. However, the NHTSA is not always the one who issues a recall.

Occasionally, the manufacturer realizes a problem exists in a certain model vehicle and will voluntarily issue a recall. Of course, the NHTSA is informed as well, and the same letter is sent to owners of the vehicle letting them know the problem with the vehicle and how to correct it. Many times, however, a recall does not affect all models of a particular year. For example, if a recall is issued on 2005 Ford Explorers more than likely it will only affect a certain batch of these vehicles and not all of them. However, if you own a vehicle of that make and year then you can take it to the dealership and the service department will run the VIN, or vehicle identification number, to determine if in fact your vehicle is affected by the recall. If so, then you can have the repairs made at no cost. If not, then you can head home knowing your vehicle is safe and sound.

Just keep in mind, however, each year millions of cars are recalled for various reasons and you should always take your car in if you suspect the recall might apply to your vehicle or if you receive a recall letter. Don’t take your safety for granted, especially if the repair for the recalled vehicle is free.