WASHINGTON, D.C.  – The 3rd annual National Plug In Day on September 28-29 will highlight accelerated growth in the electric vehicle market. From Amsterdam to Hawaii, prospective buyers will learn about electric vehicles (EVs) at events in more than 90 cities where communities are supporting the clean-air benefits and fuel cost-savings of EVs.

Events will vary. In Philadelphia, U.S. Congressman Chaka Fattah will speak and test drive an electric car. In Las Vegas, event participants will be treated to a solar EV charging canopy. In Seattle, speed enthusiasts will drag race their EVs. In Long Beach, CA, upwards of 100 electric vehicles are expected to be available for viewing and test drives, and the mayor has issued a proclamation in honor of the day and local EV leaders. In Amsterdam, the E-Challenge will roll out more than 250 EVs through its city center. And stock car racer Leilani Münter will showcase her Tesla at Octoberfest in Charlotte, NC.

“Americans are finding out how liberating it can be to drive electric. We noticed a significant increase in electric vehicle sales following the last National Plug In Day, and the numbers keep rising,” said Plug In America president Richard Kelly. “More EVs are hitting the pavement, and they are selling. We’ve gone from 345 electric vehicles sold in December 2010 to 18,000 by December 2011 to 70,000 by the end of 2012. Last month American consumers bought more than 11,000 EVs, doubling EV sales from the previous month. To date, more than 130,000 EVs have been sold in the U.S. since late 2010 – with sales effectively growing by about 200% a year.”

“I’m going to let you in on a little secret: Today automakers are competing on innovation and efficiency, America has cut its oil use by 10 percent in the past eight years, and EVs are a big part of that success,” said Michael Brune, Sierra Club executive director. “National Plug In Day is our chance to take our electric cars on a victory lap. Sales are exploding, plug-in technology is beating gasoline-powered cars while saving Americans money on gas and reducing pollution.”

Plug In America, the Sierra Club, and the Electric Auto Association are organizing National Plug In Day, with many other partners and sponsors at the local level. For more information about National Plug In Day and a list of events, visit http://www.pluginday.org. 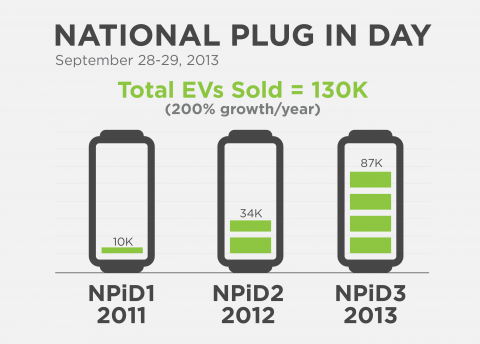 About Plug In America: Plug In America is leading the nation’s plug-in vehicle movement. The nonprofit organization works to accelerate the shift to plug-in vehicles powered by clean, affordable, domestic electricity to reduce our nation’s dependence on petroleum and improve the global environment. We drive electric. You can, too.  www.pluginamerica.org.

About the Sierra Cub: The Sierra Club is America’s largest and most influential grassroots environmental organization, with more than 2.3 million members and supporters nationwide. The Sierra Club’s Beyond Oil campaign advocates for a switch to electric vehicles as one important way to reduce emissions and cut our dependence on oil.  For more information, visit www.sierraclub.org/EVGuide.