When J.F. Launier’s bright yellow Buick Riviera street rod, Rivision, took the Ridler Award at this year’s Detroit Autorama, the win proved to be more than a little controversial among Hemmings readers. Love the car or hate the car, it represents one man’s vision of the ultimate street rod, and it turns out that there’s quite a bit more to the Rivision than first meets the eye.

First, it’s worth diving into a bit of Buick Riviera history. Originally conceived as a personal luxury car to rival the Ford Thunderbird, the XP-715 (the Riviera’s original internal name) was intended to be offered by Cadillac, possibly initiating a La Salle revival. Bill Mitchell’s vision for the car came during a trip to London, where he witnessed a coachbuilt Rolls-Royce in a thick fog; the car’s “knife-edge” styling stood out, and Mitchell envisioned such sharp lines with a lower stance and a dose of performance, a la Ferrari, thrown into the mix. Per Mitchell’s vision, then, the Riviera was always meant to be an attention grabbing car, with a dose of muscle and handling added to the mix.

J.F. Launier is no stranger to the 1964 Riviera. In fact, he owned an example as one of his first automobiles and still refers to it with more than a little bit of reverence. Perhaps that’s why he chose the Riviera over other potential starting points; besides, as Launier himself put it, “I wanted something different than a 1969 Camaro.” Enter Rivision, a name that carries a double meaning in itself: first, he wanted to revise the view of what constitutes a cutting-edge custom, and second, he wanted to revise the belief that a “common man” could no longer win a Ridler Award.

Purists will still decry his choice of a 1964 Riviera as a starting point, but it’s worth noting that the car he began with was little more than a rough body shell “parts car,” for which he paid a mere $300. The 1971 Riviera that gave its roof and rear window to the project was in slightly better condition but still suffered from severe rust-through underneath. In other words, no pristine examples of the breed were dissected for the build of Rivision, and it’s not likely that the population of worthy parts cars was reduced, either. 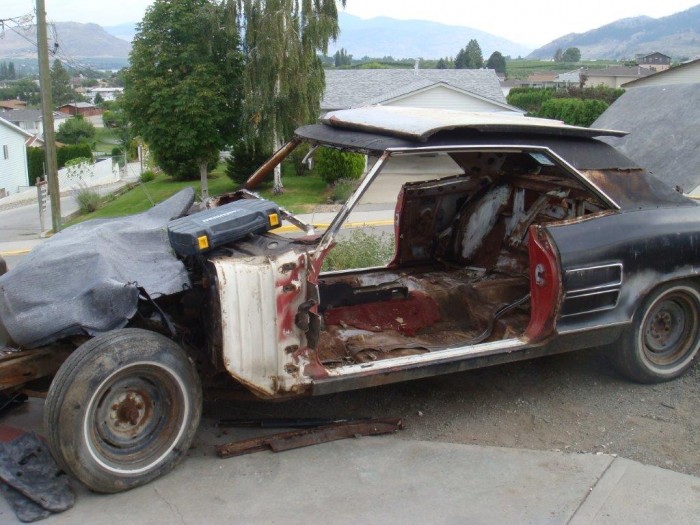 Beginning with the 1964 Riviera, Launier knew that he wanted to change the car’s roofline to give it more of a custom appearance. Wanting to stay within the GM family, but not necessarily within the Buick brand, he contemplated using the roof from a Chevelle, but realized that it, too, was a bit ordinary in the presentation. The boattail rear of the 1971 Riviera wound up being the perfect blend of form and function, but even this roof, window and upper decklid required serious modification to fit the dimensions of the 1964 Riviera’s body. That’s not the only retro GM touch seen on Rivision, either; the tail panel (excluding the taillamps) is homage to the lines of the 1962 Chevrolet Impala.

Some have questioned why the Rivision uses a modern 6.2-liter Chevrolet LS1 V-8 engine, and the answer is cost. The LS1 is easy and relatively inexpensive to build, as aftermarket parts are prevalent and forced induction (in the form of twin intercooled turbochargers) poses few challenges. After conversations with builder and Buick fan Troy Trepanier, Launier realized that the cost of building a Buick Nailhead V-8 to make the kind of power he was seeking could easily top the $100,000 mark, and that additional amount simply wasn’t in Launier’s budget. 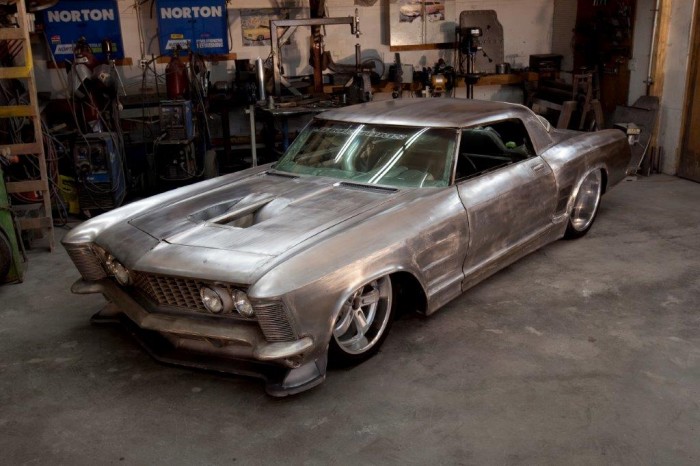 The location of the twin turbochargers and associated plumbing in the trunk raised criticism as well, but Launier insists the build was done this way on purpose to put as much weight as possible over the car’s rear wheels. The engine is indeed pushed far back against the firewall, and with the turbos, intercooler, and associated plumbing (plus fuel tank) in the rear, Rivision carries a sports-car like weight distribution of 48 percent front, 52 percent rear. Perhaps the most controversial part of this arrangement is the massive intake tube that runs from the turbos, through the cabin and into the engine, and Launier admits this is primarily for show. In his words, he “wanted to get people talking,” and there’s no denying that the design feature did just that.

Launier promises the Rivision will be more than just a show car, and already has plans to run it at the Goodguys Street Machine of the Year event. Expect to see it in other autocross competition as well, and Launier isn’t ruling out a trip to the Texas Mile. Though there’s no specific land-speed record he can attain, Launier said he would take great personal satisfaction in knowing that he built and owns the world’s fastest Ridler Award winner.

Even those who don’t appreciate the car’s lines have to recognize the work that went into building it. Launier spent six years of his own time working the metal, building the chassis and even painting the car, and every dollar spent on Rivision came from his own pocket. His purpose behind building Rivision was to make a statement, and though not all can agree on what that statement was, there’s no denying that Launier achieved his goal.