WILMINGTON, Del., Dec. 6, 2012 – White/white pearl dominates the global automotive color popularity ranks for the second consecutive year, according to the 2012 DuPont Automotive Color Popularity Report, released today.  Black/black effect moves into second place in the global ranks this year, largely due to the increased popularity in the Asia Pacific market as this color has a worldwide perception of high quality and luxury.  Silver fell to third, as its popularity has waned due to its overall gradual decline, especially in the critical large automotive markets of Europe and Asia. 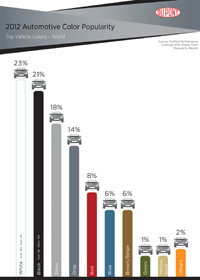 White/white pearl moved to top the ranks in Europe in 2012, and was in the leading position as the most popular car color in North America (U.S. and Canada), Japan, South Korea, Russia, South Africa and Mexico.  Overall, white/white pearl represents 23 percent of the global market in DuPont’s 2012 report. The DuPont report, in its 60th year, is the largest and longest running report of its kind in the automotive industry.  It is the only report to include global automotive color popularity rankings and regional trends from 11 leading automotive regions of the world. Over the past decade, white has held significant rankings in automotive color popularity and is widely seen in other consumer products worldwide.  During this timeframe, white’s popularity had been highlighted across all vehicle segments, though historically, it had been most popular among the truck segment.  Past advancements in pearlescent whites enabled this color to initially break into the luxury segments. “Today, white tri-coats are more readily applicable to the global manufacturing base and evoke quality and value among a variety of vehicle segments,” according to Nancy Lockhart, DuPont color marketing manager.  “Solid whites have been seen in vanilla shades, stone shades and the current preference of bright whites.” Black/black effect led among vehicle color popularity in China, but took second place in the global ranks with 21 percent of the world’s share of automotive color.  Silver rounded out the top three global color choices, topping the ranks in South America, Brazil and India, but slipped four percentage points to just 18 percent of the overall global automotive market from 22 percent last year. “Silver peaked during the start of the digital age between 2000 and 2006,” said Lockhart.  “We’re seeing more luxury vehicle purchases now that the economy has started to stabilize, and vehicles painted black/black effect are seen as luxury status symbols in several key global markets.” Red, gray and brown/beige each gained a percentage point since last year’s report, while blue maintained equal share from the 2011 rankings.

The top global vehicle colors in DuPont’s report are as follows:

White/White Pearl, Black and Silver: North American vehicle color in 2012 was once again dominated by white/white pearl, with 24 percent market share, putting it in first place for the sixth consecutive year.  It also led the compact/sport and truck/SUV segment. Black/black effect was at the top of the intermediate/CUV segment and luxury/luxury SUV segment popularity ranks. It represented 19 percent of the overall market, maintaining second place in vehicle color popularity in North America.  Compared to metallic versions, solid blacks are most favored in the truck segment.  Metallic blacks brought interest to the market and have been widely used in all segments, especially in luxury/luxury SUV. For the first time since 1998, silver did not lead in any of the North American vehicle segments, which may be attributed to the increased influence of black and white as status symbols for luxury and quality. However, silver held steady in third place overall with 16 percent market share. Gray rose two percentage points this year with increases in the truck, luxury and intermediate vehicle segments.  The top four preferences, white, black, silver, and gray, have represented the majority of popularity the last 10 years. Red rounded out the top five color choices across each vehicle segment and consequently, overall in the region, with 10 percent of the market.  Popularity rankings of red (10 percent), blue (7 percent), brown/beige (5 percent), yellow/gold (2 percent), and green (2 percent) show bright colors are widely noticed on the road but do not make up the majority of consumer preferences.

White/White Pearl Trumps Black as Top Color In 2012, white/white pearl overtook black/black effect as Europe’s most popular vehicle hue.  With 24 percent of the overall European market, white/white pearl also topped the compact/sport and truck/SUV categories in the region. “The significance of white is represented in sustainability preferences and advanced design,” said Elke Dirks, DuPont color designer for Europe.  “White pearlescent shades are growing in popularity as well, although their use is minimal compared to solid whites.” Black/black effect has been losing popularity in the region since it peaked in 2009, according to DuPont, and has slipped to second place overall, with 23 percent of the market.  However, it maintains its leadership position in the intermediate/MPV and luxury/luxury SUV categories. Gray (15 percent) and silver (14 percent) have both decreased in popularity this year, while blue continues to increase, grabbing eight percent of the overall European market in 2012.

Leads Japan and South Korea, as Black takes China; Silver Tops in India White, black and gray are the top colors in the Asia Pacific region overall, but white seized the lead this year from silver, with 22 percent market share in the region. Black and gray were 21 and 20 percent respectively, while silver dropped to fourth overall with just 14 percent. Red rounds out the top five colors in the region, with 7 percent of the overall market in 2012. Japan’s affinity for white/white pearl continued in this year’s report for the sixth consecutive year, with the top spot and 27 percent share, up from 26 percent in 2011.  At 22 percent, black/black effect increased in popularity and ranks second in Japan.  Rounding out the top five, silver (17 percent), blue (8 percent) and gray (7 percent) fell in popularity this year, while red is growing in popularity, netting 6 percent of the overall Japanese market. “The compact car segment in Japan shows more eco-trends with more natural and earthy color choices, which we expect to see more of in the market moving forward,” said Kumiko Ohmura, DuPont color marketing manager, Asia Pacific. South Korea has the highest popularity of white/white pearl in the Asia Pacific region at 28 percent, an increase of 3 percent over 2011 and overtaking the longtime leader, silver (23 percent), in the country by 3 percent.  Black/black effect represents 16 percent of the South Korean market and gray colors 15 percent of vehicles in South Korea, with blue and red tied in fifth with 5 percent each. For the first time, black/black effect topped the market in China, with 24 percent of the market, reaffirming the global association of black with luxury and high quality. Silver ranked second in China, with 20 percent of the market, while gray has increased this year to 17 percent, tying with white/white pearl.  Red rounds out the top five overall at 9 percent in China. India sees the lightest colors at the top of the color popularity charts.  Silver leads, with 28 percent of the overall market, while white/white pearl is a close second at 27 percent.  In third, light versions of brown/beige rank with 12 percent, while gray follows with 11 percent.  Black receives its lowest ranking globally in India, with just 7 percent.

Red, Blue and Green Make Strides While white/white pearl (18 percent), silver (15 percent) and black/black effect (14 percent) lead the color preference charts in Russia, more vibrant colors are making a local statement. Red is in a close race with black/black effect for third place, with 13 percent of the market, and blue follows with 12 percent.  Green also shows the highest ranking in the world in the Russian market, with 8 percent.

White/White Pearl Continues its Reign: South Africa had the world’s highest market share of white/white pearl of any region or country that DuPont analyzed in this year’s report, with those vehicles representing more than 38 percent share.  Silver followed, with 20 percent market share, and black/black effect and gray tied in third place with 13 percent of the market each.  Red and blue each represented 5 percent of the South Africa market.

To complement its 60th Global Automotive Color Popularity Report, this year’s annual DuPont global color collection represents a collaboration of new styling trends and technologies showcasing a colorful inspiration for automotive designers. The latest collection, “Color Mind,” showcases trends that are focused on four groups, as follows: Exceptional luxury and quality are associated with colors in the “Noble Ambition” group.   These color selections are those most associated with luxury goods throughout history.  Colors include a jewel-like green, “Ivy League,” a pearlescent white, “Prince Charming,” and a bold bronze, “Nobelist.” High visibility design trends and modern colors exaggerated in the “Individual Attitude” group.   These stylish colors are intended for the fashionable individual who wants to be noticed.  Colors include an intense red solid color, “Eye Candy,” a dark teal, “Miss Personality,” and a soft muted pink metallic, “Lone Wolf.” Innovative technologies and energy initiatives are brought forward in the “Progressive Nature” group.  Some of the metallic variations are “Electronic Beat” and “Virtual Vision.”   Natural colors include beige, “High Tech Nature” and a medium earthy brown, “Futurist.” Historical automotive colors are revived in the “Authentic History” group.  In this group, past favorites are reformulated with a modern twist.  Key colors are “Re-imagined Gray” and “Green Revival.”  Others include a bright red, “Famous,” and a grayish blue, “Global Heritage.”  These latest color trends are formulated into leading technology and application processes for today’s automotive manufacturing. DuPont Performance Coatings has been the recognized leader in color technology for more than 90 years.  We continue to deliver some of the most innovative colors and color tools to the industry.  DuPont Performance Coatings scientists continue to lead the industry in the extension of color technology to the digital rendering of color and color design. Earlier this year, DuPont and global alternative asset manager The Carlyle Group (NASDAQ: CG) announced a definitive agreement whereby Carlyle will purchase DuPont Performance Coatings for $4.9 billion in cash. The transaction is expected to close in the first quarter 2013, subject to customary closing conditions and regulatory approvals. DuPont remains committed to serving the automotive industry after the sale of the Performance Coatings business. Following the closing, DuPont will generate more than $3 billion in sales of advanced materials to the auto industry.  The company is committed to working closely with automotive customers to apply its science-powered innovations related to light weighting of vehicles, revolutionary and environmentally friendly refrigerants, biobased seat fabrics and headliners, and next-generation biofuels. DuPont (NYSE: DD) has been bringing world-class science and engineering to the global marketplace in the form of innovative products, materials, and services since 1802.  The company believes that by collaborating with customers, governments, NGOs, and thought leaders we can help find solutions to such global challenges as providing enough healthy food for people everywhere, decreasing dependence on fossil fuels, and protecting life and the environment.  For additional information about DuPont and its commitment to inclusive innovation, please visit www.dupont.com.

You might want to check out our article on using touch-up paint for automotive uses.